The Happy Cog team is composed of many different people with unique backgrounds, experiences, and skills. In this “Getting to Know” series of blog posts, we hope to let our readers get to know our very talented team as well as we do. From what they do outside of their day jobs to their tastes in music to what inspires them, these posts offer a little glimpse into the lives and personalities of our amazing team.

Q: First, let’s set the record straight (because we have four Chrises here!) How do you pronounce your last name? Do you have a nickname on the team?

A: My last name is French Canadian, and while there’s a “frenchier” way to say it, my family pronounces it along the lines of “leh-gas-EE.” 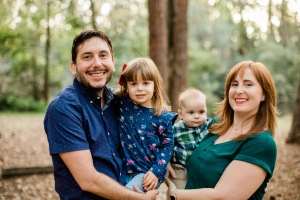 The first “additional” Chris to join has a ridiculously similar sounding name to mine (Legaspi), so I became “Chris from Development” and he was “Chris from QA.”

However, the dramatic increase of Chrises here at Happy Cog has been faster than the ability to come up with a clever new nickname. I’m no longer the only Chris in Development, and I’m not the only Chris from Florida. René had suggested “OG Chris,” but so far “Chris from Florida” appears to have stuck (The other Floridian goes by Cadams). I’m open to suggestions!

Q: You just got promoted (congrats!) Tell us a little bit about your new role and what you do at Happy Cog.

A: It’s super exciting, thanks! My new role is the culmination of my experience in the field for the last 15+ years, which has a narrowed focus on WordPress. I’m the WordPress Lead, so my time will increasingly be spent setting the standards and documentation for all things WordPress (including the bootstrap we use for all of our projects). I’m looking forward to seeing how we all grow and expand our knowledge and resources across several platforms.

I’m the WordPress Lead, so my time will increasingly be spent setting the standards and documentation for all-things-WordPress.

A: I’ve always been a “nerd,” but when I was starting high school my career of choice was to be a Zoologist. However, I realized that the likelihood of being a Jack Hanna-style “in the field, watching animals in the wild” was very unlikely (for several reasons). So, I switched to my other interest at the time: computers.

I love the immediacy of web development, how I can very quickly open up a file and start viewing the results in the browser. Recent years this has changed with the huge amount of “productivity” tools (Webpack, pre-compilers, pre-processors, serverless configurations), and while these tools have absolutely benefited our careers and speed to improve, it has slowed down that immediacy. I’ve found my side projects tend to be more and more barebones, as such, only adding frameworks and tools when they’re vitally needed. 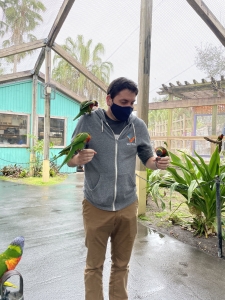 Q: Happy Coggers are all over the place. Where do you live? What do you enjoy the most about where you reside?

A: I was born and raised in Central Massachusetts, but I’ve called Tampa Bay Florida my home for the past 14 years. We’re not really beach goers, but we’re at the pool every single weekend (and sometimes during the week) during summer. Little beats the Florida winter though, especially when I’m taking walks in the “brisk” air while my Northern friends and family are freezing under a pile of snow!

Q: What kind of interests/hobbies do you have outside of work?

A: I’m a craft beer nerd, regularly visiting breweries (less so during this pandemic) and used to brew my own beer. I even created a website called Suncoast Brews to help people find all the local breweries.

I also like to head out on the road with my bicycle. Before kids, my weekends were often filled with 50+ mile bike rides. In the past I’ve done a few 100 mile bike rides, several 75 mile rides, and plenty of metric centuries (~62 miles). These days I’m lucky if I get out for 20-30 mile rides, but mostly I’ll go on a ~15 mile round trip to the playground with my daughter on the back of my single speed.

Most of my free time, however, is spending time with my wife and kids. We love going to Walt Disney World and Zoo Tampa.

Q: If the Internet didn’t exist, what would you be doing instead?

A: If the Internet didn’t exist, it’s unlikely I would’ve been as immersed into computers in general, so probably Zoology as mentioned above. I still have a business card (pictured below) I made in elementary school that was the Kanclerowicz [my original last name] Animal Hospital. Naturally, the address was next to Walt Disney World. 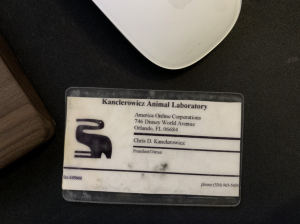 Q: What is something you’re proud of – whether it be personal or professional – and why?

A: It’s cheesy, but of course: Becoming a dad. It has been absolutely amazing seeing these little kids grow up. Jacob is fast approaching 1 year old, and Emmeline will be 4 this summer. They have been incredible children, great personalities, loving and caring.

I’m also proud of successfully competing and finishing in two races, pushing myself to new limits: A Sprint Triathlon called Escape from Fort DeSoto, and the Cigar City Criterium.

Q: Do you have a favorite project that you’ve worked on at Happy Cog? What is it?

A: Our internal WordPress Bootstrap has continued to be a point of pride for me. I’ve always wanted to get this kind of standard going, and have attempted to at many of my places of employment. It’s been great to be recognized for the work.

For the fellow developers out there: It uses Docker, Timber, and Tailwind. I’m currently implementing Webpack into it (I was using PostCSS directly to start) because every project ends up adding Webpack anyways. There are a couple new projects in the pipeline I’ve been pretty excited about, and hopefully I can share more about those soon. One is rebuilding a donation page from an older framework into WordPress. It’s been challenging and exciting to make progress, and my first experience with AlpineJS.

I tend to equate myself as a Zen Buddhist, with the emphasis of trying to focus on the moment I’m currently in.

Q: Do you have any bucket list items? What are they? 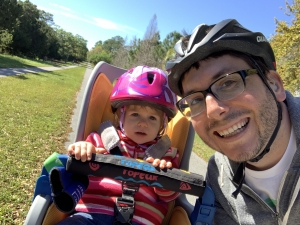 A: I tend to equate myself as a Zen Buddhist, with the emphasis of trying to focus on the moment I’m currently in. As such, I don’t tend to have a bucket list. I have broad high-level things I’d like to do: travel, go to concerts of the bands I love…but I don’t tend to hold strong to specifics. I’m happy and thankful to have made it as far as I’ve come, and all that I’ve done, and find enjoyment in being thankful for what I’ve got.

That said: I still would love to skydive one day. My wife is adamantly against the idea, for better or worse.

Q:  Do you have any hidden talents or something you’re really good at?

A: I’m really good at fitting tents or other huge complicated items back into their original carrying cases, and I think I’m pretty good at folding a fitted sheet. Maybe I’m just good at folding!